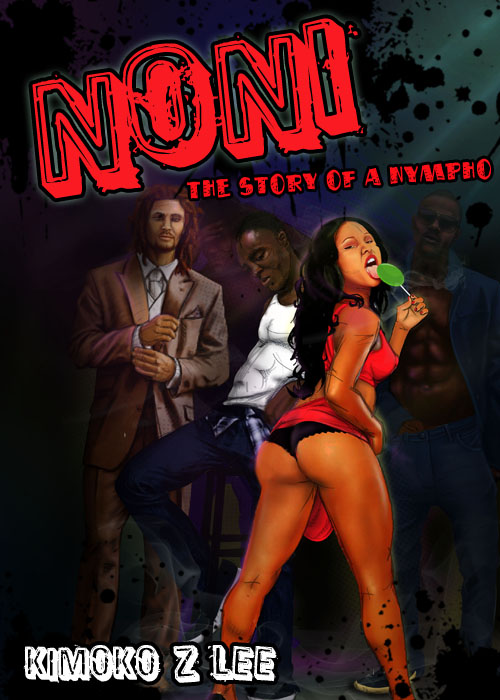 Please click thru to read selections from the first chapter

It was like magic how fast we got tha bags from outta Paco’s van to Uncle Pete’s truck. We piled in and headed off to Uncle Pete’s new house in West Orange. I had neva been to dis house. It was big! Why was Uncle Pete and Uncle Tig’s grass greener than my Daddy’s? He drove up tha circular driveway and stopped right next to tha entrance dat had double doors wit glass in them. It was a big tree in tha middle of tha front yard wit a swing. Dat was mine durin’ our stay. Each of us retrieved our bags and entered tha house. Followin’ Keith inside, he gave us a tour. “Dis is tha foyer.” Carla’s confused, “Wut’s a foyer?” Aunt Sue chimed in, “Tha entrance to tha house honey.” “Oh. Ok.” Carla’s still confused. Tha livin’ room was to tha left of tha foyer. Tha dinin’ room was to tha right. And tha kitchen, family room and a small bathroom was at tha rear of tha house. Tha kitchen had slidin’ doors that led to a deck, and a big ass backyard. Upstairs had all tha bedrooms. Uncle Pete and Aunt Sue’s room was huge, and had its own bathroom. Keith’s room was big too. He had a smaller bathroom tho. There were 3 more bedrooms and a big bathroom fo’ us to use. He told us to put our bags in his room and come down to tha basement. Once we saw tha basement, we all wanted to stay down there. It was finished, a big screen TV (don’t know how big, just big), video games, pool table, and a stocked bar fo’ us to do some sippin’.

Uncle Pete and Aunt Sue pretty much left us alone tha rest of tha night. They only shouted down to see if we had eaten. We had tha music up, playin’ games and of course sippin’. Keith tiptoed upstairs to see wut they was doin’. They was both knocked out, as they both had to get up and go to work tha next day. Keith came back down stairs to get me. He took me up to his big brutha Steven’s room. “Why we in here?” I wanted to know. “Steven got deez movies. I want to show you one. I want you to tell me wut you think.” I had a feelin’ wut tha movie was. Eagar to see it I replied, “Ok! Show me!” He slowly closed tha door, as to not make any noise. He locked it. I didn’t say anythang. He went ova to tha TV and turned tha sound down low. Then he started tha movie. It started out like any other movie. I really didn’t pay much attention to it. Keith had moved closer to me and leaned in to kiss me.

We kissed softly. It was our first kiss! I was beginnin’ to think he just put in a regular ol’ movie. He looked up at tha screen then told me to look. Tha man was slowly pullin’ off tha lady’s dress. She wasn’t wearin’ any panties. I knew wut time it was, I kept watchin’. He kissed just below her belly button. Then he slowly went down on her, lickin’ and kissin’ on her pussy. I asked Keith, “Why was he doin’ dat?” Like I didn’t know! He said to me, “It was tha beginnin’ of them makin’ love. Do you think it’s nasty?” “No, not if it’s a part of makin’ love.” I didn’t know much bout makin’ love, fuckin’ yea. He gently grabbed my chin, and turned my face toward tha TV, “Keep watchin’.” Once tha man had finished goin’ down on her, he laid across tha bed. Tha TV was so low I couldn’t hear wut they was sayin’. I still watched. She crawled up tha bed and put his dick in her mouf and was suckin’ on it like a lollipop or icy. We looked at each other. Keith had a big ass Kool Aid! I knew he wanted me to do dat to him. Dat’s why we was watchin’ dis. He was tryna teach me how to fuck him.

I looked back at tha screen. Now she was sittin’ on his dick, ridin’ it like she was on a horse. Just then I could hear Chris whisperin’ our names. Keith went to tha door. Chris wanted to know, “Wut yall doin’ in there?” “Nothin’! Watchin’ a movie,” he informed Chris. “Let me see.” Chris tried to push his way in. Keith told him, “Dis movie is only fo’ boyfriends and girlfriends.” “Yall watchin’ a porno. Oh hell yea! Let me see! Let me see!” Chris still tryna get in. “No, go back down stairs wit tha girls and keep them down there. I’ll let you watch it tomorrow. Now go before nosey ass Esna come up here.”

“Aight, you betta let me see it tomorrow.” “I will. Now just go back down stairs.” “Ok!” Chris left. Keith came and sat down next to me and explained, “I only wanted you to watch dis movie so we could learn how to make love to each other.” And I understood! He was my boyfriend and dat’s wut boyfriends and girlfriends do. And I was so ready to do wut boyfriends and girlfriends do. After dat one went off I wanted to watch another one. But we didn’t, we went back down to tha basement. It was late and they was all sleep. We both knew wut we was bout to do. We just didn’t want to take tha chance of gettin’ caught if we stayed upstairs. It was time to review wut we had just learned. We was off in tha corner behind tha stairs. Dat was a good spot! If Uncle Pete or Aunt Sue was to come check on us, we wouldn’t get caught. I had on a nightgown. Keith told me to take off my underwear, and get under tha cover. He only had his pajama bottoms on. He pulled tha covers back and got on top of me. We started to tongue kiss. I wasn’t scared! I had butterflies in my stomach tho, but in a good way. He reached down underneath tha covers and pulled up my nightgown. He started suckin’ on my nipples. Oh Gawd, it felt so good! My legs got tight round his waist. Tiny’s snorin’ broke tha mood. We stopped and looked ova at them to make sure they was still sleep. They was! We got right back into it. Keith was humpin’ me as he sucked my nipples. It kept gettin’ betta! He asked,” Can I kiss your Poo-Noni?” “Do you want to?” “Hell yea? Do you want me to?”“Yes!”

He started to lick my pussy. It was uncomfortable at first. He really didn’t know wut he was doin’. He was shovin’ his fingers in me. I told him just kiss it, no fingers. I couldn’t believe how good it felt. I was squirmin’! My tummy was tinglin’! And I felt so wet down there. It was hard to keep myself quiet. Did I just pee on myself? I pulled him up. “Let me do you?” “Ok!” We looked at them again to make sure we didn’t wake them up. I neva seen anybody come outta their pajama bottoms so fast. I pushed him back to lay down. His dick was so hard. Then I put it in my mouf, and sucked on it like it was a lollipop. I went up and down on it like tha lady in tha movie. I looked up at Keith. He had both his hands ova his face. Since he didn’t tell me it hurts or stop, I musta knew wut I was doin’. I could feel it throbbin’ while it was in my mouf. He pulled me up, and told me, “Now it’s time to put it inside.” “Ok.” I laid back down, and he got on top of me. He was pokin’ round down there, but couldn’t quite find it. I kind of felt relieved. I thought to myself, maybe he hadn’t done dis before! I know I didn’t.

I took my hand and guided him in. He was pumpin’! It slowly went in lil by lil. I moved my hand once it got all tha way in. He whispered, “Are you ok?” “Yes.” “Does it feel good?” “Yes.” It really did! Thought it wasn’t supposed to feel good till I got grown. “I love you.” “I love you too.” We fuck fo’ a good lil while. Chris turned ova. Keith hopped offa me. We both pretended like we were sleep. Chris popped his head up and looked all of us ova, then laid his head back down. Keith fumbled fo’ his bottoms and I pulled down my nightgown. “We’ll finish tomorrow,” Keith said before he kissed me. “Aight, Goodnight.”

6 comments on “Noni – The Story Of A Nympho”