Home » All Books » DJ SPEED: THE RUTHLESS YEARS AND BEYOND
Tweet 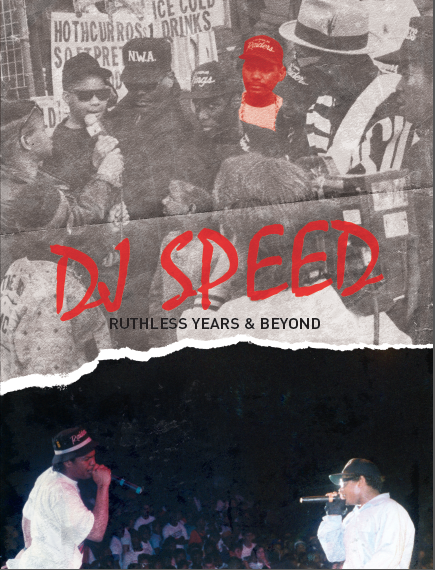 DJ Speed was born in Compton California seven houses down from Dr. Dre, two blocks down from Eazy E’s house and three blocks down from MC Ren. A few years younger then the soon to be world famous N.W.A members they took in a young DJ Speed and set him on a life long journey which eventually lead to traveling the world and spreading the gospel of Hip Hop. It was watching a young Dr. Dre with his then Company High powered Productions DJ in his garage that an even younger DJ Speed got the bug to want to get his own tables and start DJing himself. At the young age of 13 going under the moniker Super Dope Speed his obsession with DJing would officially begin.
Tutored by other amazing west coast DJ’s like legendary turntablist Joe Cooley who took him under his wing and helped him grow and learn Speed was very blessed to have the best possible mentors in the game
Speed knew Ren from school since the third grade but when Ren introduced him to Eazy E that was the meeting that would change his life forever. Eazy took a liking to the young guy and gave Speed two Technics Twelve Hundred turntables on the first day meeting him! Soon he was on the road with Ruthless records on their very first tours filling in various capacities including roadie duties and then Djing for Ruthless’s hit female group JJ Fad riding the wave off their massively successful platinum single “Supersonic”. Eventually graduating to becoming the DJ for classic Ruthless records artist D.O.C.
When Speed was about to graduate High School he started going out on tour with Ruthless, these historical early rap tours with N.W.A. included all the shows reenacted in international successful film “Straight Out Of Compton”. Including the Easy Duz It and NWA and Eazy E’s other early tours, Speed also went on to do the LL Cool J Nitro tour. This book is a document of DJ Speeds incredible career and the historic shows, tours and artists he has been a part of. Travel back in time to the birth of the greatest rap label of all time Ruthless records through this very rare collection of photos and documents from the beginning of it all.