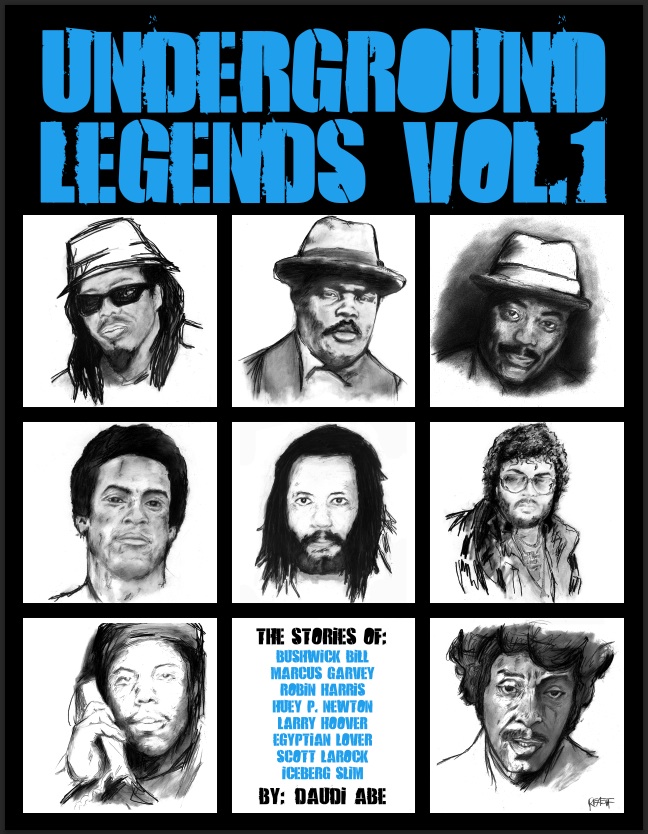 What makes someone an underground legend? Not being a part of the mainstream is one definite requirement. This new series tells the amazing  stories of some of the most important Underground Legends ever. The legends featured in Volume one are all well deserved of this honor!

Larry Hoover’s story is deep, many hear his name in rap songs as Chicago’s biggest gangster or drug dealer, but most don’t understand his real legacy. Yes it’s true he was the leader of what is considered the biggest Chicago street gang ever the Gangster Disciples. Then at age  23 Larry was convicted of a murder and railroaded into a ridiculously unfair sentence of  150-200 years. After Hoover was incarcerated he still was running the show and after he switched up the GD’s motto to stand for “Growth & Development” and attempted to get young disenfranchised Black and Latino’s to register to vote then of course the government got real dirty with him. Get the real story.
Iceberg Slim started pimping at 18, and continued to be engaged in pimping until age 42. Then In 1967 as a reformed pimp he was encouraged by his wife, to write his first autobiographical novel  Pimp: The Story of My Life. The effect of “Pimp” was truly revolutionary.  His depiction of the dark underbelly of urban culture was so real and gritty nothing like it had existed before! Iceberg Slim was truly the first of a new wave in contemporary urban literature and his effect on popular culture can be felt far and wide. His books have sold many million of copies and his influence on modern storytellers from Quentin Tarantino to Ice cube is undeniable.
Robin Harris one of the funniest comedians to ever do it, originally from the South Side of Chicago, Robin first started to get known as the M.C at the comedy act theater in LA and then from his roles in Spike Lee’s films he really started to bubble. Robin is respected by so many because even though right before his untimely death he was really starting to have the real Hollywood success, this didn’t change Robin. He kept his $400 a week MC gig at the Comedy Act Theater Off Crenshaw and kept his act for his community and didn’t compromise one damn bit!

The Egyptian Lover started out as a DJ in Los Angeles with Uncle Jam’s Army DJing small parties and clubs and grew to the point where they had dances at as large a venue as the L.A. Sports Arena with 10,000 people strong! He began making records around 1982 as a member of the Radio Crew, and also Uncle Jam’s Army. Egypt was truly a legend for owning his own record label before any other black hip hop artists had started that trend and competing nicely with the major labels because his music was a phenomenon! A fascinating musical visionary who has influenced many with both his musical production style and his ground breaking entrepreneurial business approach.

Marcus Mosiah Garvey, Jr., was a controversial Jamaican political leader loved by many while at the same time being demonized by others. He is best known for being a staunch proponent of the Black nationalism and Pan-Africanism movements. He founded the Universal Negro Improvement Association and African Communities League (UNIA-ACL). His controversial Back-to-Africa movement created much drama for Garvey while making him some strange alliances.  His story and his resonating legend are as unique as they come.

Bushwick Bill was born in Jamaica as a youth he moved to Bushwick N.Y. hence his nickname. After relocating to Texas  in the mid 1980’s he was discovered by J. prince the owner of legendary Texas label Rap-A-Lot Records. The first album didn’t blow up but after they added members Scarface and Willie Dee, Bushwick Bil became a hip hop legend as a member of groundbreaking southern hip hop group The Geto Boys. Urban Legend Bushwick Bill  a one of a kind artist with a one of a kind story.

Scott La Rock was a true Hip Hop Pioneer as founding member of one of it’s most important groups Boogie Down Productions. It was at his job as a youth counselor/social worker at the Bronx’s Franklin Armory Men’s Shelter on 166th Street where Scott would meet a young man with whom he would make music history, KRS ONE.  Read about his incredible impact on the cultural despite his being with us for such a tragic short time.

Huey P Newton and his partner Bobby Seale were the founders of the Black Panthers. The Black Panthers turned into one of the most important cultural movements in American history. He had many episodes with the law and many jail stints but he eventually earned his PHD and became a very respected political activist. Huey’s incredible story the up’s and the downs are all here.